What Do Workers Want?

The pandemic drove many people to consider the trajectory of their careers and their lives, and this has had a sweeping effect on workers’ tolerance for risk, their priorities and dealbreakers when it comes to how they trade their time and talents. Workers, it’s important to remember, are people—sensing, feeling beings with hopes, dreams, wants, and needs. How are they feeling about work? What’s important to them?

Burned, and Burned Out.

Considering how many workers were laid off, took pay cuts, or had to find ways to become both full-time caregivers and fully productive employees, it isn’t any wonder that people are feeling more stress since before the pandemic began—and 56% of respondents said they are, indeed, feeling more stress at work in the past two years.

One in five workers said they’ve called in sick due to burnout in the past year, and more than a third (37.1%) said they felt they had too much to do at work and not enough time in which to do it.

Workers are overwhelmed; more than a third of workers (35%) said the demands of their job were interfering with life responsibilities. While historical data on this particular question is not available to determine whether this has always been the case, we are seeing that people’s tolerance for such an imbalance is waning.

When asked whether the pandemic has changed how they prioritize work, about 11.8% of people in the workforce said it is less important now. Family time; financial needs and goals; flexibility and remote work have all become increased priorities among respondents.

Work hasn’t moved to the back burner for everyone, though. About the same percent of the workforce (11.6%) said it has become more important.

How people feel very much tends to depend on their position in life. Those who are older and in a higher-income bracket tended to say it’s become less important; those who are younger, Black or multi-racial and make less money said it’s become more important. One might infer from this data that work—a dependable, family-sustaining source of income—has become more important to those segments of society who have endured the greatest financial hardship since the pandemic began.

Money talks. But it’s not everything.

Employers said they’ve increased wages as their top talent strategy, but it hasn’t solved the problem. What do workers say about money?

A good wage tops the list for factors they prioritize in considering work options, with eight out of 10 workers saying it’s very important and only 3% saying it is not very or not at all important. Wages are so important that many workers expect to see them in job postings before they’ll even consider applying: 72% of respondents say that including salary information in a job listing is very important and another 26% say it’s somewhat important.

As one employer said during a roundtable discussion, “Wages are table stakes, nothing more.” What else are people looking for in a job? 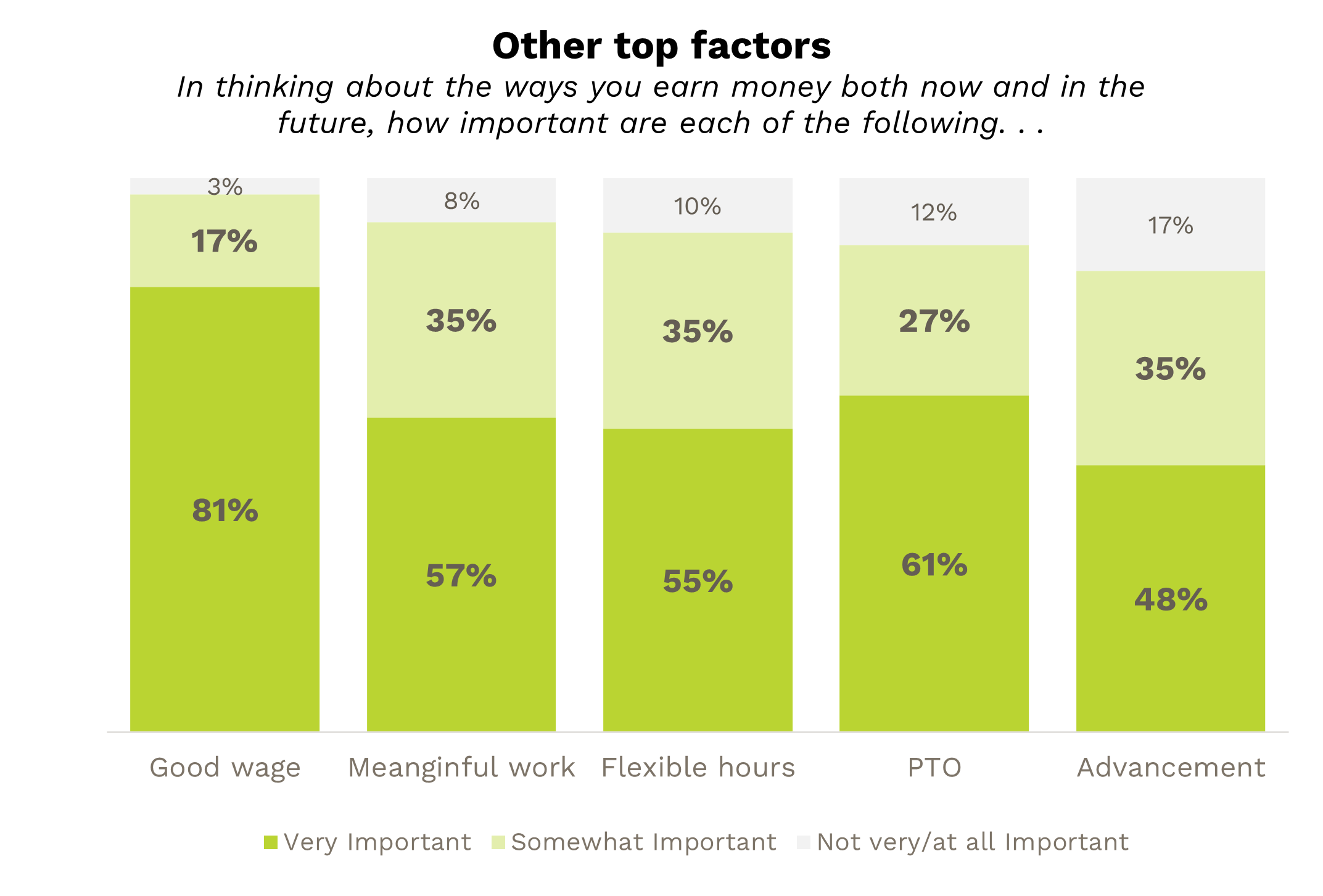 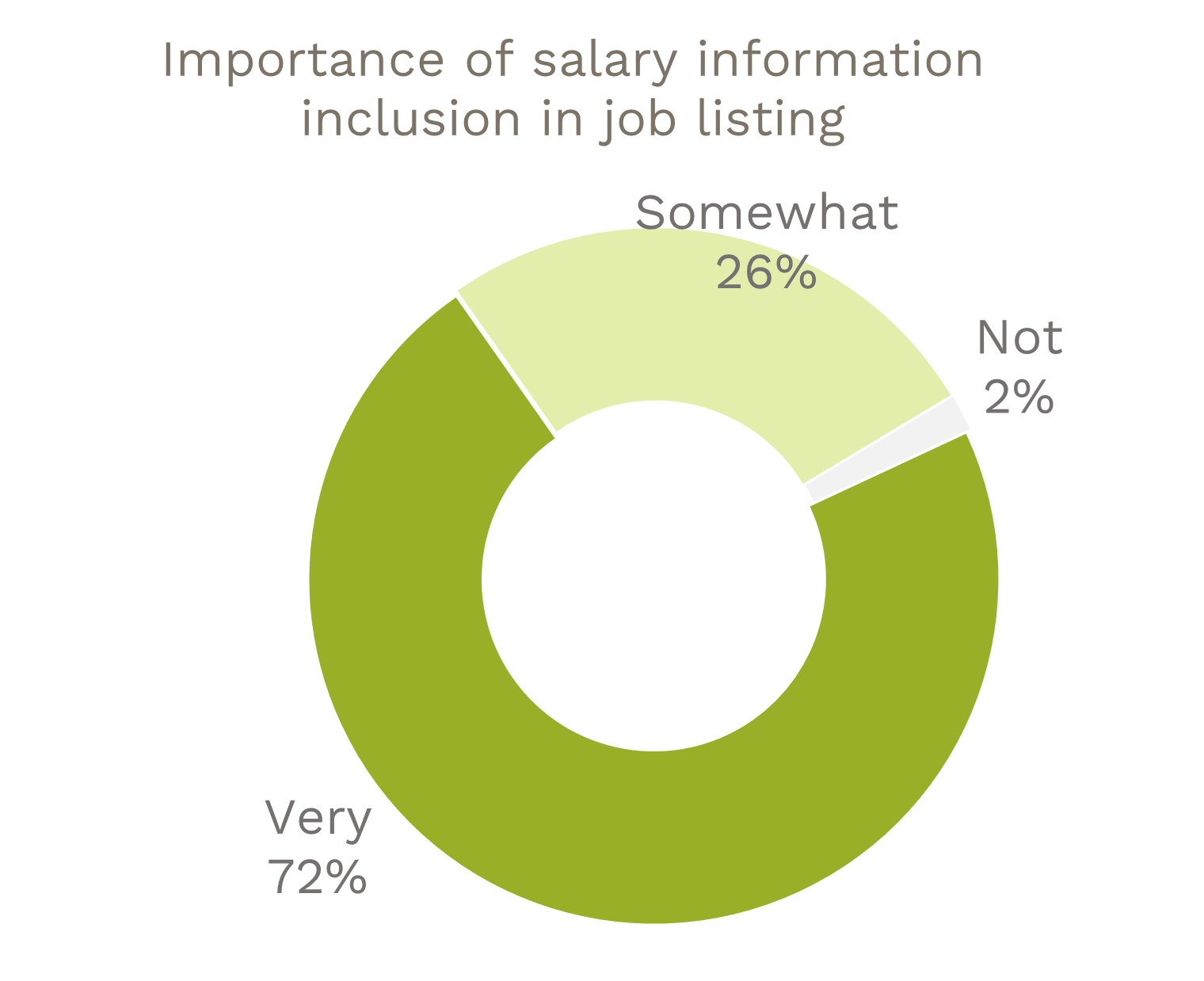 “All money is not good money.”

An oft-asked question in the past year has been, “Does a workplace have to be fully remote to be competitive?” No, is the short answer, though it does help. The majority of workers are expressing a preference to work fully or mostly from home, though a meaningful number still prefer to work fully or mostly from a workplace. A good question for workers could be: What are you aiming to get from working at home? Answers may vary, from comfort, to skipping the commute to being home in time for dinner. This can better inform what workers are looking for and, therefore, how employers can respond.